Less than one in five landlords are in the business for the long term. What does that mean for everybody else?

News is what you make of it. And the same set of data or research can mean different things to different groups of people.

Naturally, if you have a vested interest in the issues being reported, you’re more likely to believe stories which put a positive spin on whatever figures are being thrown around.

So it’s occasionally worthwhile to take a positive headline and turn it around, hold it up to the light and see it from the other side.

The headline in this case is, “Almost one in five landlords say they are in the business for the long term.”

We found the news on property wire, but the exact phrase is repeated, word for word on a number of other property news outlets.

The phrasing is positive. It’s upbeat. It gives the reader an impression that the property market is healthy, robust, and committed.

The research comes originally from Foundation Home Loans – a specialist mortgage lender rated  1.8 out of 5 on google. It’s probably safe to say that they an interest in keeping the BTL market alive and kicking.

The key points from the research are these:

Neither Property Wire nor Foundation Home Loans want you to flip those figures. They don’t want you looking at things from an angle which could lead to less business for them, so we’ve done it for you. It’s not difficult.

Overall these figures seem pretty bleak to us here at rent.works. 6% of landlords are ready to drop it all right now, and the overwhelming majority of those who don’t plan to give up in the near future will quit at some as yet undefined date.

These are not figures that fill the rent.works staff with confidence. These are the sort of confidence figures you see in a market which is growing more and more nervous – even as property prices rise, and rents are, in most parts of the country, going up steadily.

Even old timers who have invested in property as a sort of alternative pension are starting to flutter. The over 55s, who saw bricks and mortar as a safe alternative to stock market backed pensions and hedge funds and who should soon be starting to to rely entirely on their property portfolios in their dotage, are not confident enough to commit long term.

So, why haven’t the 80% of landlords who plan to quit already sold up and moved on? 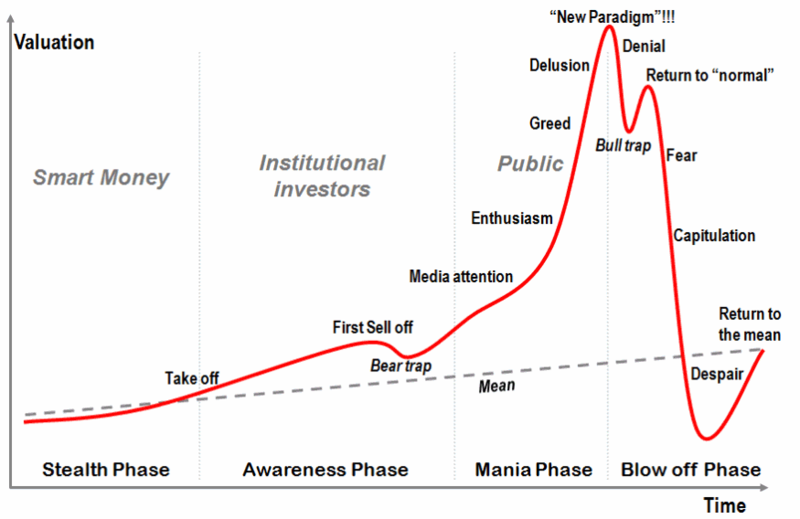 This is a graph we ‘borrowed’ from wikipedia showing stages of a financial bubble.

With a decades long career as a professional writer, David Rutland has worked as a journalist on local, national, and international newspapers, before embarking as a career as a freelancer.

He has ghostwritten several books, as well as producing travel guides, manuals, humour articles, and more internet blogs than you can shake a stick at.

David maintains offices in East London, but spends most of his time in a shed near Liverpool, where he writes, as well as developing apps for Android.

What people say about him:

Are you sure this won't get us all arrested? - Mohana Prabhakar, Editor in Chief, Apex News Group

Go and have a shave. You're all prickly - Mrs Donna Rutland.

The News You Need To Unlock the Good Life

Join the ranks of landlords and tenants and get in-depth guides, expert tips and exclusive subscribers-only offers delivered directly to your inbox. They're free!